Months ago, my husband went on a work trip and returned with a small Pinta for my son. He LOVES it still to this day! Aside from having a fascination with pirates and pirate ships, he wanted to learn everything he could about these two ships. Needless to say, it was a bit of an easy decision about attending the homeschool tour of the Nina and Pinta when they came through town. I didn’t even tell him until we were on our way there because I knew he’d be too excited to sleep.

We paid, got put in our group, and walked down the boardwalk towards the two ships. That’s when it happened. I had just finished taking this picture…

…when everything fell into the ocean! My keys, my wallet, my bag. All of it. Floating away. I ran around like my pants were on fire asking anybody and everybody if they had seen a net. For goodness sake, we’re in a marina, somebody has got to have a net or SOMETHING, right?? Wrong. Everybody just stared and watched as my bag floated away. Granted I was using an Elmo bag, so they probably figured I was some ridiculous mom freaking out over my son’s bag of toys or something easily replaceable.  As I frantically look on all the surrounding boats for a net, I’m thinking about how we would get home, or how many banks I would need to call to get new cards.

The bag was just on my back and all of a sudden it broke! I debated jumping in, but was worried about leaving my son by himself and not to mention that our field trip would be over as this soaking mom would have to head home and dry off. Just as I was about to get in, a wonderful man offered up his son who was a great swimmer! He could easily take off his shirt and shoes and his dad and I could help lower him in without him scratching against any barnacles. He swam about 30 feet to my bag and brought it back. I should mention that I had a bottle of water in my bag, which is apparently the only reason that my bag isn’t still at the bottom of the ocean! I was so lucky that day and so blessed to have that boy volunteer to get my bag. Hopefully that was the easiest money he made that day, because I was so thankful for him!!

Now that my dramatic story is over, back to the field trip! We had a wonderful time considering the start of the trip! We really enjoyed touring the Pinta and hearing the stories of the volunteer crew that sleep and drive the ship around from port to port. 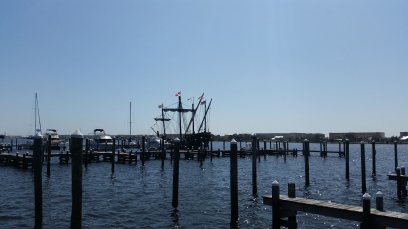 Then it was off to the Nina! I think this was our favorite because it was a bit larger! We would’ve loved to see the crew cabins, but those were roped off as the crew has all their belongings and beds down there. It was neat to hear about their bathing and bathroom habits while on the ship, along with learning that they used the canon to signal when they were arriving in a port.

Find out more about The Nina and Pinta or check to see where their next port of call is! I highly recommend this for young and old alike!

Have you been able to catch the Nina and Pinta on tour? If so, where were they?